Take a Look at our gallery of key events

Click through the photo gallery to get an overview of our work. 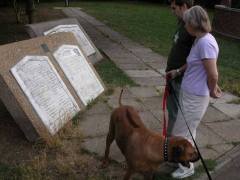 This is our memorial as it was... These tablets were originally mounted in the Nurses Home that was paid for by the inhabitants of Runwell and Wickford to be our memorial. Sadly the home was demolished in 1976 to make way for the new ring road and the only parts kept were the tablets from the porch recording the names of those who had been subscribed to be added. Having been remounted in ready mix concrete for three decades, time and weather was taking its toll and it was a 'now or never' moment to save them and part of our heritage that started this campaign and indeed the Wickford War Memorial Association. 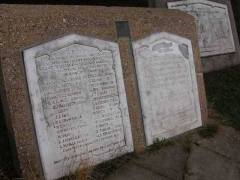 A larger image showing the condition of the plaques in the run up to removal. Clearly these did not do the men they commemorate or our town any justice and the momentum for change was unstoppable. 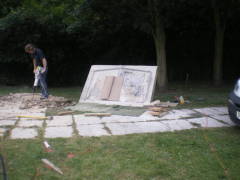 In July 2011, we finally got going with the finance in place and the first job was to remove our poor old damaged plaques and get them out of their mounts, and restored ready to be remounted in the new memorial 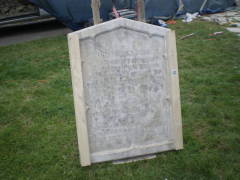 And so after 30 years of being displayed inadequately finally the plaques were free. The next time they would be visible here would be when the new memorial was unveiled. 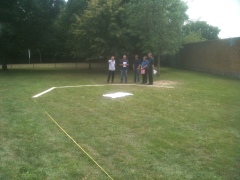 As the summer drew on and with readiness to start digging, we plotted the layout of the propsed area of the new memorial area and were able to expand the parade ground area by a bit to allow for more standing space 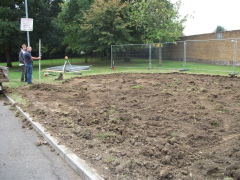 It was late September/early October by the time the first digging took place and preparations were made for the footings and levelling to take place. For all of us involved in the process this was a proud day.

Within a few days the footings were in and quickly thne parade ground area started to go down, with levelled curbs and the design in a draker stone showing the outline of the layout of the original War Memorial Nurses Home

The next area to go up was the back walls which would make up the main part of the memorial and house the original plaques. As October progresses so did the memorial work 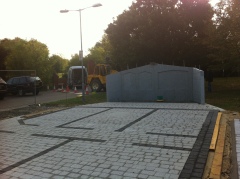 Once the back wall was up, the side walls that were be engraved with the names of those missing from our originals were erected and slowly it became possible to visualise what the completed item would look like. 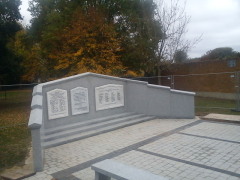 As the leaves turned brown and October became November we had but four days of the new month to finish the project in readiness for the unveling. One thing was certain though, the result had exceeded our expectations...

Below are a number of galleries recording the opening. Featured within the images are the speakers on the day, as well as the grand unveiling which was carried out by Lord Petre, who as Lord Lieutenant of Essex holds the same position as Lord Lambourne did when he originally opened Wickford's original memorial in 1922.

After a very wet start, the rain gave way to late Autum sunshine for the duration of our service, which included a planting of trees by the mayor, Doug Benjafield from Veolia Pitsea Marshes Trust, one of our key sponsors, and from Charlotte Descamps who travelled from Zonebeke, a town on the front line of the Ypres Salient battlefields in which many Wickford men were killed as a represenative of the mayor of Zonebeke as well as the people of Belgium.

Following the opening we moved over the Royal British Legion hall, where a buffet lunch had been kindly prepared by them.

It is at this point perhaps appropriate to thank those who believed in the project and funded it, so our sincere thanks to, The Veolia  Pitsea Marshes Trust, The Essex Environmental Trust, Basildon Council and of course all of the individuals making up the Wickford War Memorial Association, which included many of the relatives of those commemorated on the memorial.

Below are some images from our very first Remembrance service at the new memorial. We were fortunate to be blessed with one of the warmest November days on record which, combined with the interest in the new memorial led to record breaking numbers. This in turn led to a few teething issues for places to stand and a failure with the sound system, which was a great shame but which we will seek to rectify for next year. It was particularly heartening for those of us who had been so involved in this to hear the comments of people as they took their turn after the formal ceremony was over to pay their respects.

For me personally these two events were two of the proudest days of my life as bringing this to fruition as been a large part of my life over the past six years, and now it is done I can only say that every knock back, problem and issue we encountered along the way were all worth it.

But thats not the end of the story. We now intend to use the momentum we have gained to look to restoring the WW2 Avenue of Remembrance back to its former glory and work with Basildon Council to help them with the vision of making the War Memorial Park itself, a place we can all be proud of and more people can enjoy in more ways.

We also intend now to use the memorial more than just for special occasions but also for educational visits and to try and explain the local effects of a global conflict on a town and its ordinary people, living in extraordinary times. 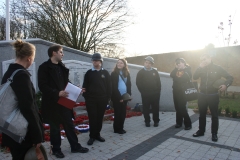 And on a very cold and windy day in December we had our first two schools visit and by using helmets of each of the armies I demonstrated the ebb and flow of the war as well as the battles and theatres in which our local men were lost. 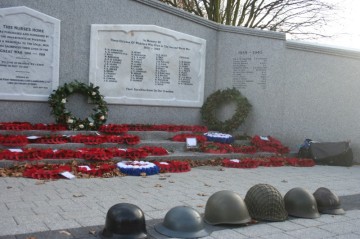 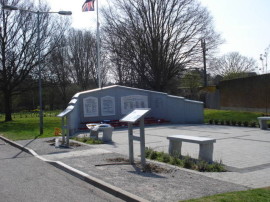 The final part of the main memorial project to complete was the interpretation boards that explained the history of our memorial, its loss and now its new form, location and design. These went in mid March and have been well recieved and well read by visitors to the park. The most common question now being answered explaining that the markings on the parade ground represent the floor plan of the original Nurses Home and the size and entrance of this area all relate to the layout of the original home and memorial. 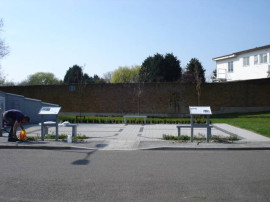 Instead of having the two tablets either side of the doorway as it was in the original nurses home we now have two plaques explaining the history and loss of the memorial in similiar locations to the original plaques, which now stand sentinel having been refurbished and remounted on the new memorial. 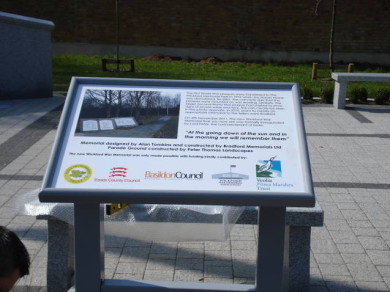 The text of the first board reads:

The First World War plaques were transferred to the Wickford Memorial Park in 1976 when the Nurses Home was demolished. By 2001 the concrete slabs that the plaques were mounted in was eroding. Similarly the larger Second World War plaque had started to show signs of severe wear and tear. This can clearly be seen in the photo opposite. In 2010 plans to create an appropriate memorial to the fallen were finalised.

On November 4, 2011 the new Wickford War Memorial that you now see was formally inaugurated by Lord Petre, the Lord Lieutenant of Essex.

The new Wickford War Memorial was only made possible with funding by: 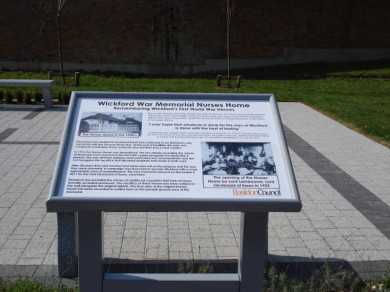 The second board reads:

The scale of losses from the Great War was enormous. So many were posted missing that every town and cillage in the UK chose their own way to record the sacrifices within their own community. Wickford chose to have a 'living memorial' in the form of a nurses home.

Quote from Mr Joseph Leete at the first meeting on February 13, 1919 to decide what was to be done in honour of the men who did not return. Mr Leete's own son, Sydney had been killed in action with the Royal Flying Corps' 57 Squadron over Belgium on July 28, 1917.

The home was situated in Southend Road and continued to be Wickfords only memorial until the Second World War. At the end of hostilities this park was created to remember those residents who lost their lives in that conflict.

In 1976 the nurses home was demolished. the two tablets recording the names of those lost were erected inside the park gates alongside the World War 2 plaque. The way all the plaques were mounted was unsympathetic and did not recognise the scrifice that Wickford residents had made in both wars.

After 30 years time and weather had taken their toll on the plaques and the way they were mounted. A campaign was launched to provide Wickford with a more appropriate area of remembrance. The new memorial was opened on 4 November, 2011 by the Lord Lieutenant of Essex, Lord Petre.

Research has provided the names of additional casualties that had not been formally recorded previously. The sacrifice of these heroes has been added on the wall alongside the original tablets. The floor plan of the original Nurses Home has been recorded in outline form on the parade ground area of the memorial 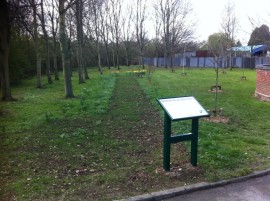 The ghost outline of where the old plaques and paving used to be still remain but the area has now been planted as the 'Heroes Arboretum' with a tree to each of the theatres where Wickford men were lost in WW1. With the river running alongside it is hoped it will be used as a quiet place of reflection. 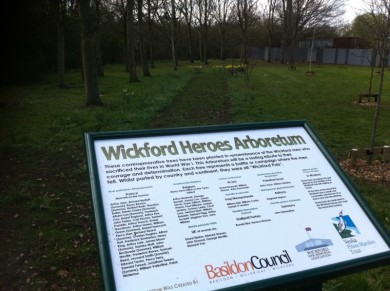 The board overlooking the Arboretum reads:

These commemorative trees have been planted in remembrance to the Wickford men who sacrificed their lives in World War I. This Arboretum will be a lasting tribute to their courage and determination. Each tree represents a battle of campaign where the men fell. Whilst parted by country and continent they were all 'Wickford Pals'.

France- Many on the Somme (names)

Belgium Many at Ypres (names)

UK Many of wounds (names)

In Wickford- This tree recognises the part played by the families of the Wickford Pals. At the time of the Great War Wickford was a small rural community and the loss of so many men was devasting. This tree is thus dedicated to the Wickford Heroes who kept the home fires burning. 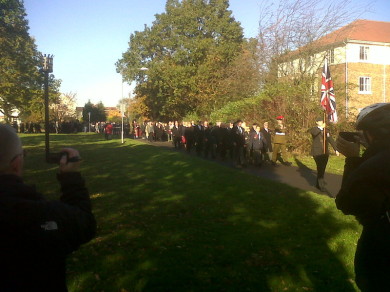 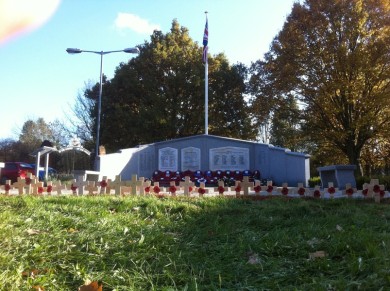 And after the parade is done it always looks wonderful at the memorial with a  new splash of colour of the new wreaths.

The third memorial we have been involved in restoring, saving or having erected was at nearby Downham. There were a number of names that had been incorrectly recorded as well as missing gallantry awards and general wear and tear. All these were resolved and a suitably arranged rededication ceremony was performed. Have a look on the news page for more details on let the images below scroll through for a visual record of the day.

A look at the Avenue of Remembrance - June 2013

As we now start to make our more detailed plans for brining stage two of the restoration in the park (see news section) I thought a scrolling image gallery of the Avenue of Remembrance as it is now would be a worthwhile thing to do. Here's hoping by this time next year, the Then & Now comparison will be as starting as it is for our memorial. 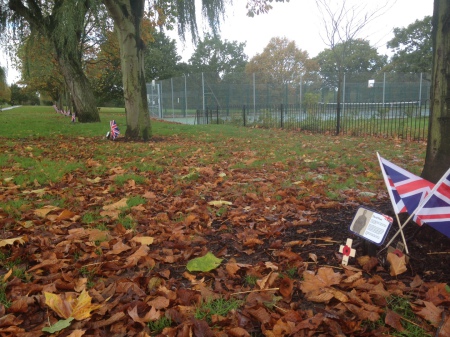 For Remembrance weekend we once again decorated the Avenue, photos dont really do it justice but it looked stunning.

We are a non-profit organisation and welcome any kind of support. If you would like to support us, please check out the Support Us page for more information.

Check out our News Section to see what's been happening lately. 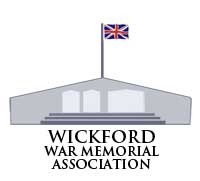